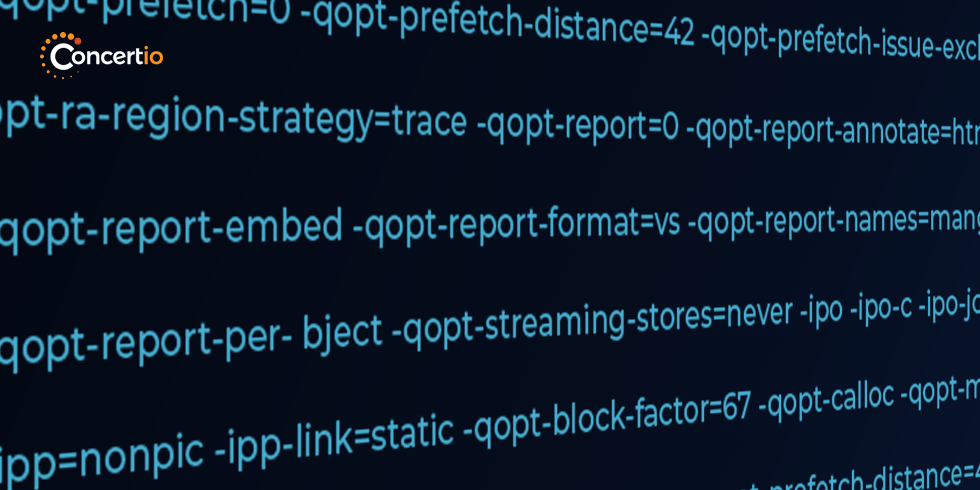 One of the main reasons for using a commercial compiler is for attaining better binary performance. But how can we achieve the highest performance? By using -O3? Not necessarily.

Let’s take Intel C++ compiler (ICC) for example. It’s a popular commercial compiler that produces highly optimized code that many times outperforms GCC (see this blog). ICC has hundreds of flags to choose from, clearly conveying to us users that for better performance, we’ll need to choose the right flags from that long list – otherwise, why are these flags there in the first place?

Intel refers to C++ code samples on their website, and we’ll choose Merge Sort for our evaluation. The benchmark is described on Intel’s website as follows:

The Makefile of the benchmark includes a set of recommended compiler flags for use with ICC, as shown below:

The flags above are consistent with those Intel recommends in its “Quick Reference Guide to Optimization with Intel® C++ and Fortran Compilers v19.1” for tuning for application performance. These recommendations are:

The Merge Sort benchmark has a serial and a parallel (OpenMP) versions and it runs them both. When the benchmark finishes, it reports the computational time it took to perform the merge sort of the shuffled input set as described in the README.md of the project. Below is the output of one such run:

The definition file is below:

Next, we write a script that will be invoked by Optimizer Studio in each iteration. The script performs the following tasks:

After we have the workload script and the definition file, we run the optimization on an Intel(R) Core(TM) i7-7800X CPU @ 3.50GHz. Optimizer Studio attempted to find a better configuration using 243 different flags, that represent a parameter space of 1.3*10^138. In the optimization process, Optimizer Studio attempts different configurations and uses the workload script to recompile, run and measure the benchmark’s performance. Eventually, Optimizer Studio achieved a 12.7% performance boost for the serial version of the benchmark, as shown in the following table:

Achieving the 12.7% boost took 25 hours. However, the improvement was achieved gradually: 5% was reached after only one hour and 7.7% after only 2 hours.

Running this optimization with Optimizer Studio allows us to plot insightful graphs of the configuration space like the one shown below, where the vertical axis is the time for the serial version and the horizontal is for the parallel version:

The best-performing configuration had the following 116 flags:

At least in this merge sort example, the Intel compiler behaves on par with other compilers like GCC and LLVM, where a careful or calculated choice of compiler flags can yield 5%-20% of improvement in performance over the trivial -O3 and -ipo flags. Therefore, for maximum performance, it is not enough to just purchase a commercial compiler – it is necessary to also mine the compiler flags.